The science behind CoolSculpting®

Are you curious how CoolSculpting works? Years ago, scientists at Harvard University observed that some children who ate popsicles got dimples in their cheeks. The scientists—Dieter Manstein, MD and R. Rox Anderson, MD—realized that the popsicles were freezing and eliminating small pockets of fat cells.

The idea that cold can target fat cells—without damaging the skin or surrounding tissue—was the insight behind Cryolipolysis®, the proven science on which the CoolSculpting® procedure is based.

The CoolSculpting® procedure safely delivers precisely-controlled cooling to gently and effectively target the fat cells underneath the skin. Treated fat cells are crystallized (frozen), then die. Over time, your body naturally processes the fat and eliminates these dead cells, leaving you more sculpted.

Fat Freezing During the CoolSculpting® Procedure

Many of us have stubborn fat despite diet and exercise. CoolSculpting® technology uses controlled cooling to target and kill only these fat cells. In the weeks to follow, your body naturally processes the fat and eliminates dead cells. CoolSculpting® results are long term* because treated fat cells are gone for good.

Fat cells that are frozen during the CoolSculpting® procedure gradually die off and leave the body through the body’s natural elimination process. That’s why the results are long-term—the fat is gone for good! Untreated areas will have no change in fat cell distribution.

Studied in more than 5,500 clinical trial patients
More than 6,000,000 CoolSculpting® procedures have been performed worldwide 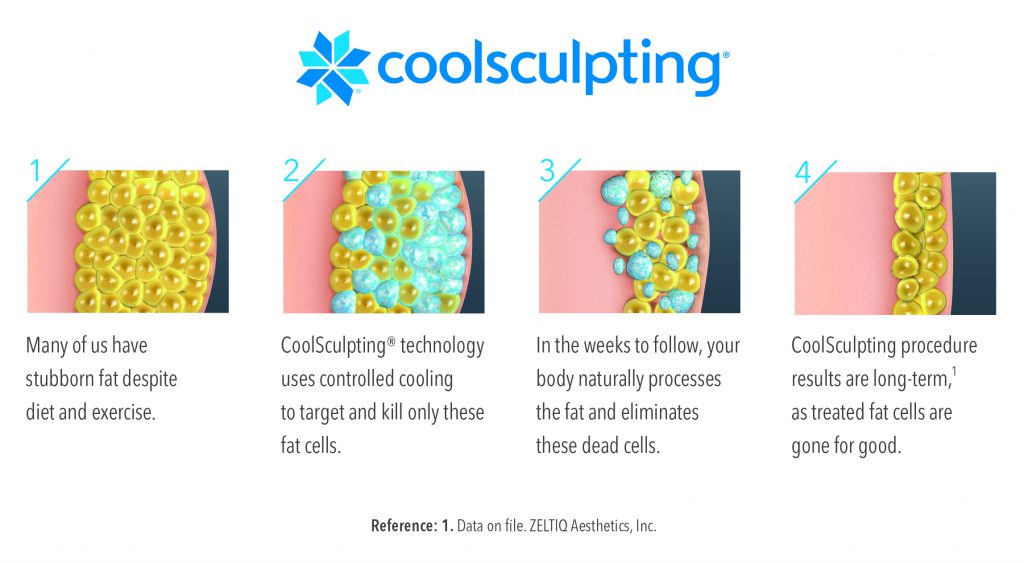 Are you ready to love every view of you? The sooner you set up your consultation, the sooner you’ll see results in the mirror—long-term results in those areas that have resisted all efforts through diet and exercise. Contact us today to find out if the CoolSculpting® fat freezing procedure is right for you.

Located in the heart of Bedford, Nova Scotia, Vibe Salon | MediSpa has been providing premium hair salon, spa, and medical aesthetic services since 2006. Indulge, feel rejuvenated, and become the best version of yourself in an upbeat, fashion-forward environment.

Monday to Friday 9am – 9pm
Saturday 9am – 6pm
Sunday Closed

*Results for treatments represented in this website may vary from person to person.